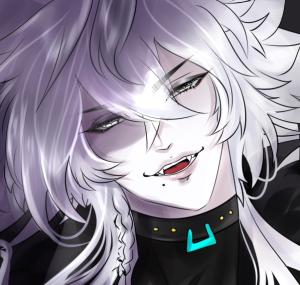 A high spirited, bubbly Yokai that seems to have an obsession with sticks. Tag along a never ending goal to find a suitor so he can find his way back home. Being delayed on his journey from human distraction and the new vast world called "internet." There is so many games, people to talk to, and the perfect opportunity to spread the Stick Cult mindset.

Yet; those who are able to see the Yokai, are also ones who have the same mind set... Why won't you share your thoughts? Feelings? Become a stick and be added to his collection.

With both parents passing when he was young Aya was pulled into the yokai and was raised alongside feral spirits. Others came upon the yokai, looking down on him and telling him that he had been a mistake, his parent's love an obscenity in their minds and his existence a terrible mistake as humans and demons, should never mix. With the burden of his bloodline weighing down on him, Aya worked at a teahouse at the edge of a forest, far away from those who shunned him, but not far enough away to dull the memories of their words. The fox often looked out to the fields, swearing he heard a call a hundred times over until the day he decided to follow them. One spoke stronger than the rest, its voice radiating from a fallen branch still covered in the morning dew. "Leave to the realm, who see.. what you see."