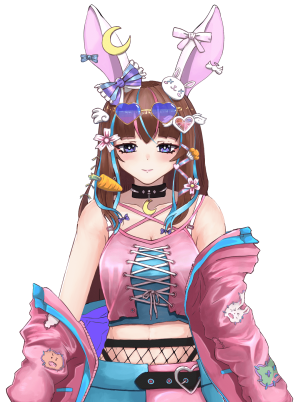 Audrey Bunny is an office lady working the vampire shift/part-time content creator. She is a variety virtual streamer/content creator. Her content mainly focuses on video games, specifically playthroughs of the following genres: story-driven adventures, MOBAs, RPGs, suspense and action games. She loves creating song covers and collaborating with fellow content creators too. Aside from those, she also enjoy cosplaying, cosmetics, drawing, anime and the culinary arts.

Audiences in the realm of Bella Lune, from humans to beasts to magical creatures—always flock together to watch live performances of a famous group of magicians named "The Top Hat". During the last performance, ending the show with the all-famous hat trick; the white, fluffy bunny snatched the magician’s wand as he was pulling her from his top hat; seeing the hat summon as a way to get out of the realm of Bella Lune and discover more realms as she was a very adventurous rabbit.

It was then discovered that the magical rabbit has traveled to the realm of the humans with the wand.

With the help of the mysterious magician’s wand, Audrey is trying to figure out why she is the only magical rabbit being summoned in The Top Hat's magic shows.

Right now, she is enjoying the ups and downs of the human realm. She very much enjoy her hobbies, and one of them is creating content and live streaming. She became a virtual streamer because for her, she sees the virtual world as a new realm—waiting for it to be explored... Would you like to keep her company in the meantime?