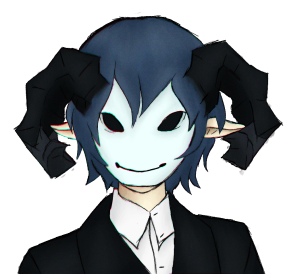 Asmophet is an English Virtual Streamer & YouTuber. Their content mostly involves gaming and commentary, but also dabble in horror-esque content such as reading creepypasta among other things.

Asmophet Sefraddon is a cosmic demon entity represented by the mask they wear, rather than the body they inhabit.

The mask, which is made of a bone-like material, has what appear to be many slits throughout the interior. These slits are home to many sorts of hellish barbed tentacles that are used to crawl and latch onto things and people. It has also been observed that the tentacles can reach an upwards of twenty feet. In addition, Asmophet requires a host body to maintain full functionality.

An excerpt from one religious body tasked with researching Asmophet Sefraddon observed that, once a host is found, their body is gored and mutilated by the mask until a preffered appearance has been constructed. Eye-witness reports claim the process is similar to medical grafting. It is assumed that the psyche of the individual is consumed during the process.

There are many rumors regarding Asmophet's origin throughout the world's largest religious groups. However, a widely agreed upon theory is that they were summoned via an ancient ritual.

During containment, the following has been documented as a result of interrogation:

I. Asmophet understands human speech, and is capable of reciprocating all human language through telepathy. II. Asmophet claims to be a "Prince of Vainglory." III. When asked of their origin, Asmophet would seemingly point skyward. Further interrogation yielded no results. IV. Asmophet is capable of changing the form of the mask, allowing for access to tight spaces. This makes search, seizure, and containment incredibly difficult. V. Obtaining a host is their top priority.

Outside of containment, the following has been documented as a result of observation:

I. Asmophet can be easily removed from their host, similar in fashion to a party mask. II. Removing Asmophet from the host does not strip them of their power or control. The body must be disposed of. III. While they do not harbor ill will towards life, Asmophet will still retaliate if their host's body is threatened.

When threatened, Asmophet's body will take on the form of a skinned moose. The mask will stretch over the head of the body, morphing into a goat's skull with two sets of black horns protruding from the top and bottom respectively. The abomination also grows a total of six appendages made of the same bone-like material as the mask that it uses to traverse and grapple. In addition, the barbed tentacles as seen on the inner part of the mask now protrude from the abomination's back to take on the appearance of wings.

This new form is recorded to be eerily similar to Hollywood's depiction of a Wendigo. It is unsure whether this is a coincidence, or if Asmophet is the source of the similarity.

There are no records of fatalities outside of initial host procurement. Currently, Asmophet's whereabouts are unknown.