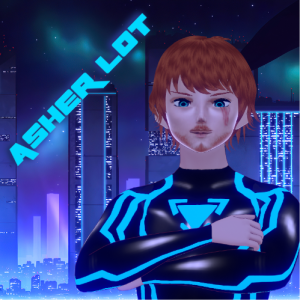 Asher Lot Is a Vtuber with a Secret identity, He is a Cyber Crime fighter Able to Dive into the Internet to stop digital Crimes!

Asher lot, Used to work for a Augmented Reality Cyber firm as a developer of more advanced AR system, However what he developed was something more, Able to dive directly into the internet and become a entity in the data him self. He was removed from the company after this as he refused to hand it over for militery use.

He now owns an Arcade as a front for his Hero identity. With his AI assaistant M.a.i He is "THE LAST HERO"