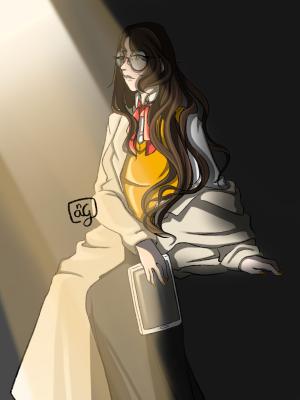 Angys is a simple researcher of Light and Darkness... or is her? Always running around making sure studies are going smoothly, but catch her drawing or vibing on a variety of games in her free time! Whether she's playing something she knows well - LoL, KH, FF games, Tales of, To the Moon series - or something she knows nothing about - OneShot, Minecraft, Opus series -, make sure to grab a cup of tea and relax with her!

Before her own world was taken by the Darkness, she didn't even know Darkness existed in the first place. She joined a study facility to learn what Darkness was, but in the process, she also discovered that Light was something that kept Darkness in check. What if, in a turn of Destiny, the very Darkness that destroyed her world and everything she loved was what made her very soul? Only one way to find out.

"You all gathered here to hear some stories, am I right? You expect me to tell you about everything that has happened during this war, you want to know about the hero who is going to bring an end to pain and destruction.

But I’m here to tell you one simple truth: there are no heroes in the battle for survival.

The Light and Darkness Research Laboratory came to be after those creatures began appearing in every world you can think of. Most of you may have seen them in the corner of your eye, but ultimately decided that it was just a simple shadow. That’s how her world came to an end.

She wanted none of the glory some of you may think about when talking about heroes or special beings with amazing powers, she wanted none of those powers either. She wished for her own happiness in the most simple way, by enjoying every day, by finding beauty in small things. There were no signs of her being special, there were no signs of her being something more. She was considered a simple, boring human being, grown up in a family just like yours.

That’s the beginning of our story."