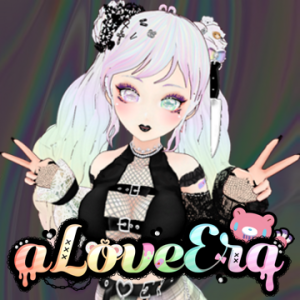 aLoveEra (She/They) is a ENvtuber on platforms such as Twitch, Youtube, and TikTok.

A self proclaimed bimbo, she presents herself with rainbow/holographic hair and heterochromia eyes (pink & green). Her style is inspired by pastel goth and yami-kawaii themes. Often times she could be seen sporting black and pastel colors as well as sparkly, lace, and girly accessories.

After growing up interested in goth aesthetics she discovered pastel goth and incorporates pastel rainbows as she realizes it brightens her life and mindset.

aLoveEra live stream content is marked as mature due to occasional swearing. She is a variety streamer who hasn't found her niche yet but knows she enjoys GTA V roleplay and PvE shooters.

Vera aLoveEra is the ruler of ERA, a magical kuma kingdom. While Vera is disinterested in acting as Monarch of the Era, the magical kuma are independent and also take care of her despite her lack of involvement. She shows them the uttermost love, affection, and appreciation. Her most loyal assistant kuma works on her behalf to handle kingdom responsibilities.

It is said that they were kidnapped by Loner, a demon, who keeps her all to himself. Often times she can be seen playing games with Loner on live streams. As a result, aLoveEra spends her time streaming, crafting, and learning new things.