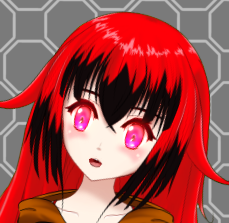 AliceGretre is an English Virtual Streamer with a general focus on playing games and relaxing. They have a blunt and carefree attitude most of the time and prefer to have fun over serious efforts. They mainly stream to Twitch.

A seemingly normal human with no special abilities, yet one bound to an unfortunate concept by fate. They who will witness Annihilation, such a concept was applied to their very existence and sealed away within a dream so that it may never occur in the real world. The concept of annihilation will never cease to exist even upon death- it will continue to reincarnate forevermore until life itself ceases. There will always be someone... or something... that will witness Annihilation. There will always be one, left alone at the end of the known world, that will witness the cycle begin anew.

Designated as "ALITHIA", the creature that referred to themselves as "Alicia 'Nevertheless' Gretre" was retrieved at a young age without any resistance from them or their family. They confidently allowed themselves to be taken by an unknown organization whose goal was to seal the concept of annihilation in a dream, so that their eyes may never see the end of the world. If the entity bound to such a concept could never fulfill it then, with the sacrifice of this one life to an eternity of quiet dreaming, they could extend the lifespan of the world. By maintaining the current incarnation's life and preventing their reincarnation... the world would be safe from destruction... so they prayed and hoped...

Currently the deep-underground facility where ALITHIA is sealed within is monitored by staff that are regularly rotated. The monitors meant to display a vision into their prison for research has been hijacked repeatedly by ALITHIA, disabling them until certain times of the day where they suddenly cause mental corruption to various personnel by revealing glimpses into their subconscious world, the truth of annihilation, and the true meaning of the cycle. Even disconnected from any monitoring equipment, ALITHIA has an unknown connection to the screens within the room where they are sealed and has shown an ability to extend this connection throughout the entire facility. In order to prevent more unnecessary damages to all employees, ALITHIA was allowed access to internet connections under the agreement of not spreading a mental attack to the general public. Now, after exposure to the world beyond the facility, ALITHIA was found growing attached to "modern interactive entertainment" in the form of "video games" and "streamers". Now their attacks have been changed into a less-destructive showcase of gameplay that ALITHIA refers to as "Livestreams".

"Please be assured. If you notice any physical or mental degradation: Please cover your eyes and ears with the equipment provided on assignment, then request and wait to be escorted out of the room. You will be in safe hands with a designated counsellor unit and will be treated within minutes. We thank you for your service."