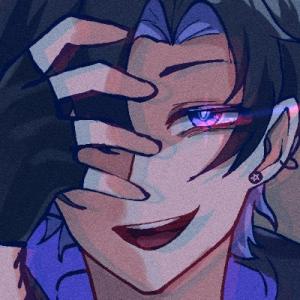 Vince is an ENVtuber who is known for his humor and calm voice. As awarlock vtuber, he enjoys making jokes and references to Dungeons & Dragons, as well as anime and manga. He hosts a variety of relaxing streams on Twitch, which involve gameplay & commentary from various mainstream and indie games, as well as Just Chatting. He also collabs with other indie vtubers on a weekly basis.

A warlock who (accidentally) isekai'd himself trying to escape the Hero. Official lore has not been released yet, but Vince has hinted that he was targeted for various crimes against a powerful kingdom.

Mephi, his crow, is the demon Mephistopheles disguised as a familiar. As a warlock, Vince's magical power is bestowed upon him by Mephi through a demonic pact. After being defeated and sent to Earth, Vince and Mephi lost most of their magic.

To return to their former strength, Vince has been tasked with becoming a Vtuber to harvest soul energy from his followers.