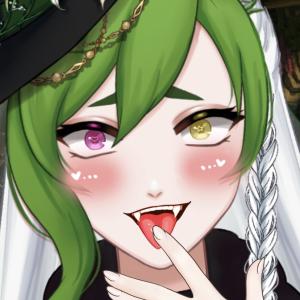 Verena Lunebrite is a vtuber on Twitch with a love for Genshin Impact, Pokemon, Story of Seasons and Kingdom Hearts. Her gaming repertoire is extensive and she loves to share the ones she enjoys while also trying out new games with her viewers. Verena is the kind of girl who will speak her mind unapologetically, so she can be blunt at times, but her passion is part of her charm. While she can seem intimidating, Verena at heart is a huge bleeding-heart and loves anyone who shows her kindness. She seeks to bring joy to others and create a space where others feel comfortable being themselves.

Coming from an alternate reality, Verena is a bobcat girl with dendromancer powers, which is an elaborate way to say that she’s a witch with plant powers, both manipulating and divination based. One day in her home world she decided to experiment with a taboo of her reality; creating a portal to cross into another. Her world had knowledge of other realities, but the attempt to wander into them was strictly forbidden. However, Verena grew bored of her fortune-telling by day, assassination by night, jobs and knew it was time for a change that only could be achieved by breaking such a rule. So using a mirror-portal method based on theoretical research she once stumbled upon, she was able to succeed in traveling into our reality. However, the one thing she didn’t account for was the portal being a one way crossing. So for now, she’s stuck here. Verena sought out her human doppel, her worlds term for her alternate self, and now she lives with her other self, who works to support the both of them while Verena stays home streaming and lurking on the internet.