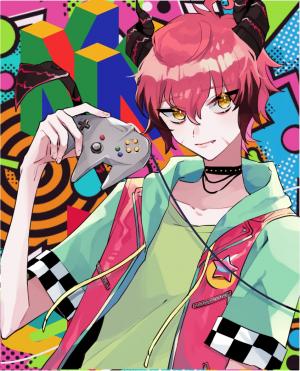 Spikey Hamstar is a Virtual Streamer who streams retro and indie games with occasionally diverting to experimental content. He is also known for his ability to mimic accents and impersonations.

He seems to be addicted to CapriSuns and Lunchables pizza. His outfit is a call-back to X-treme 80-90s fashion and the vaporwave/synthwave aesthetics.

He likes to call his fans, Ham Fam, since he likes to treat them like siblings. Combined with his retro/nostalgia motif brings a relaxed and comfy feel to his streams.

Originally a Cyberdemon that haunted a rumored prototype game in the 90's. The game was eventually found and was ripped and uploaded into the internet, but due to some corruption caused by the anti-piracy program during the upload... Spikey now thinks theyre part hedgehog (hamster with spikes). Likely due to residual data from the last game played on the console.

Still mentally stuck in the 90's, he has long forgotten his demonic roots and wants to play games he missed out on.

The corruption spread further once their streaming began, causing the failed Y2K bug in his code to mutate a mind of its own, also known as Spikey's gremlin-like feminine alter ego.