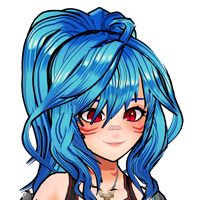 Skykam is a female Vtuber who makes English variety stream content on Twitch. She is 5'4" and a tiny menace. Started streaming on their birthday, March 11, Skykam has had two event debuts referred to as Season 1 and Season 2 models. Model was made by them along with their 3D room. Known to use iPhone XS, leap motion stereo IR 170, basic webcam, and HTC Vive 2.0 trackers for their streams. Known to accept being called "scuff streamer"

Character is a punk styled bull shark. Both the avatar and person behind the avatar are referred to as Skykam. No official backstory lore seems to be known or discussed. Community believes bull shark to be incorrect and that Skykam is actually either a goblin shark or puppy shark due to character gremlin actions and their floppy tail.