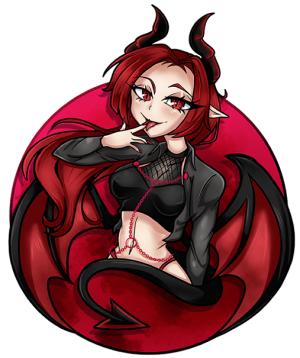 Saber_Saiber is a Female Virtual Youtuber / Virtual Streamer with German content. Her main content consists of JustChatting with a pinch of gaming, although not professional, she`ll strive for more.

Saiber is a succubus that was sent out to collect souls, but it was difficult to collect so many by herself. She scoured the internet and came across Vtubers! Soon a ploy was forming in her head. She needed to become a Vtuber in order to harvest more souls! She created a portal into the human realm and began her ̶m̶̶i̶̶s̶̶c̶̶h̶̶i̶̶e̶̶f̶ career. Not only did she made many new friends, she also found like-minded people in that world.

She has rejected the task of her master to collect souls for him. Now Saiber is collecting souls and people for her own army! She forged the plan to continue to grow her army bigger in order to reach world domination at some point. However, these plans fail more than often because she usually eats the souls herself, but this Succubus will not give up!