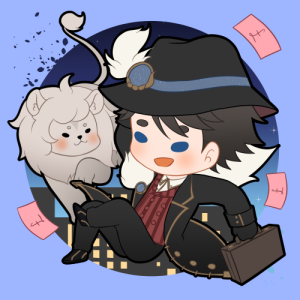 Robbie Lionheart (ロビー・ライオンハート) is an English Independent Vtuber. He is a proper Northerner that is looking to expand the local 'business'.

His goal is to achieve dominance over the world's black market! He has heard that people are getting free a workforce just by playing games and chatting to you viewers.

Join him for tales of a hard-grafting Englishman.

The Nemean lion has been reborn, and this time - England is his home. Robbie does not wonder how much time has passed since his last life, all that matters to him is that he is here right now. However, Lionheart no longer craves for combat or thrill of the hunt...no; his ferocious eyes are honed in on a new prize, a new motive, a new purpose.

Seedy at best, it might be possible that the Nemean has gone soft in his recent reincarnation if the black market is all that he yearns to control. Maybe he has allowed emotions like love, joy and excitement to consume his soul? His fresh desire for friends is one not noted in the history books.

Could Robbie Lionheart be the one to turn over a new leaf for the Nemean?

So he marched on. Relics of the past gave Lionheart a driven objective, long lost powers needed to assert his place as king back home. Now, he held them all - the fragments of his first life bundled into physical form. The eyes, the mane and the claw.

The eyes grant him unbridled focus, they merely relay his goal. The mane - the indestructible fur of flair prevents defeat at the hands of puny mortals. Last, but not least, the claw. The Reaper itself desired the makeshift Karambit for it's own collection, yet Robbie was able to stave off the forces that would be to reclaim it. Lionheart is unable to use these immortal items in tandem however. No - the fierce heritage would cause an immediate reversion to his original primitive Nemean state, back to being a mindless thrall wandering the now well-populated lands.

The Lion moves to plot his next course of action, whilst carefully utilising these new (or rather, old) artifacts in his possession.