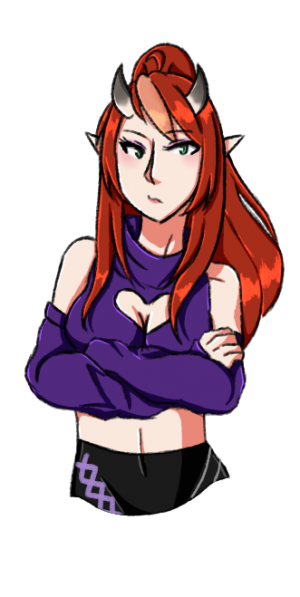 Ritsu is a female VTuber/VStreamer that focuses on variety content, including both art and video games, and is an advocate for animal welfare and mental health awareness. She streams on Twitch up to four times a week and runs off of Australian Eastern Standard Time (AEST).

She is usually found streaming with her friends, going into games from FPS, RPGs, Strategy and more. She also has one pet rabbit named Kira. Though not fluent with the language, Ritsu is trying her best to learn more Japanese and hopefully be able to converse in it one day.

Just over 300 years ago, the world was quite the different place. People believed in her kin, feared them, respected them, but now? Well, let us just say the world has taken quite the interesting turn.

For hundreds of years she sat back, watching and waiting, seeing how the once weak and easily frightened humans developed their societies... But as an Oni, it can still be hard to hold back from causing havoc, you know?

Well, to keep herself busy, Ritsu decided it was time to be productive, so to speak. A curiosity turned into a hobby, then soon after, into a dream. A dream to own a business of her own, like her brother, and offer a place of refuge to a small group of abandoned domestic rabbits.