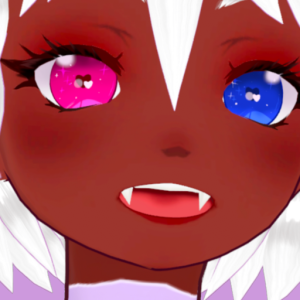 Puppkats is an English Non-Binary Virtual YouTuber and Streamer that creates art-related content and occasionally plays video games. They are known for their sarcastic personality and occasionally seductive tendencies, though they are seen more as cute than sensual to most that meet them. Probably due to their lack of...well seductive skill.

They are an asexual succubus/incubus that is unfortunately really bad at their job and was forced to take a hiatus so they now live among humans until they can 'get good' at seduction.

Though, they might have a harder time playing video games and drawing than their previous job...(ノ°▽°)

Despite being a cubi (the gender neutral term for a s3x demon) they are obsessed with romance and love; Being quite possessive over who they have their eyes on.

Due to them not "consuming" humans at the moment, they suffer from memory loss that makes them ask "Now what was I doing?" every five minutes....bear with them :3