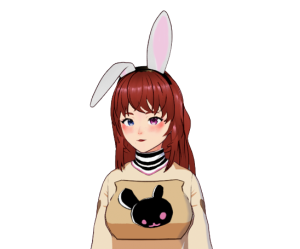 Nathalie Miko is a redhead bunny girl Vtuber. She prefers to call herself "she". Described as mostly fun, promiscuous, downright bonkers, grimdark, and mostly loves destruction way too much- but she is a bunny with a heart of gold mostly. Designated as Keter class SCP due to instability and multiple personalities with a bit of reality-bending/telekinesis shtick. When it comes to games- she likes RPG, Retro, Shooters/FPS, Stealth Games, TTS, RTS, Simulators. Sometimes doing Just Chatting sessions as Youtube reacts, streamer reacts, or Q&A talks.

Disclaimer: Part of the lore is real life and fictional.

Nathalie existed when Max (the male persona) got through terrible hardship and trauma until this day. The name Nathalie, as she said, is named after her "supposed to be" deceased girlfriend- which she finds sweet and somehow tragic. She manifested somewhere in 2015 as an unknown part of the identity of Max's. Appeared physically as a virtual avatar in September 2021, which Max the same year declared that they are literally "they/non-binary/genderfluid".

Although the grip of Nathalie's consciousness is strong within the shell of a body. The broken mind made the innate abilities stronger like telekinesis, telepathy, reality-bending, and accelerated intelligence. In exchange, the milder form of mental illness became way too strong to the point, if there is a mood swing or stressful episode, Nathalie goes dormant and Max goes feral. Max (the male bunny persona) treats Nathalie as some sort of girlfriend. Due to this chain of incidents and massive civilian casualties, Nathalie/Max got arrested by heavily armed men (disguised being as The Foundation MTF). From there on, Nathalie/Max got contained on Site-27.

The reason why Nathalie got classified as Keter is not really her fault. It is due to their original personality which is Max that is defaulting when she gets way too stressed or agitated. Originally classified as Euclid since it is easy for them to be contained on the site. They are literally that compliant when their containment turned into the literal replicate of their house (from medium size containment cell to the equivalent of a house lot). But due to The Foundation Staff's meddling presence, Nathalie/Max is the literal cause of 2 weeks worth of containment breach, thus being classified as Keter category. Since it is a literal battle of minds, Nathalie tries to calm down Max before Site-27 gets nuked or wiped out.

To admit, Nathalie/Max is harmless as long as being left alone and be respectful.

Hobbies and career while being contained.