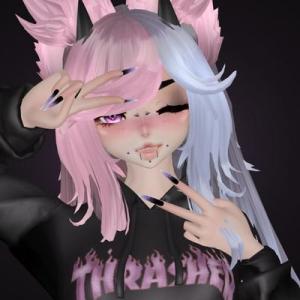 Nanachiu is a Scottish female fox Virtual Streamer. She plays competitive Overwatch at a diamond level and also loves to share herself failing at horror games. She has the appearance of an early 2012s emo.

Nanachiu is well known online for being a gossip vulture and long time cyberbully. She has made a few scandals when she was younger but since has grown into a super cynical person who wastes there time ether playing life sims and multiplayer games. Nanachiu was sitting at her desk board out her skull decided that maybe teasing the person who was doing worse than her in a Gacha game was a good idea to pass time. She went off on the poor person who was struggling to beat her in a pve match. Then ẗ̴̡̰̺͉̬͈͎̝͙̪͙̎̓ͅḫ̵̢̹̬͍̘̌̈́̈̈́̿̽̽̀̀̈͝͝ͅͅė̸̜̦͚͚̓͘y̴̘͂͒̈́̈̌̇̃͂̏̾͂͘͠ had enough in a fit of rage ẗ̴̡̰̺͉̬͈͎̝͙̪͙̎̓ͅḫ̵̢̹̬͍̘̌̈́̈̈́̿̽̽̀̀̈͝͝ͅͅė̸̜̦͚͚̓͘y̴̘͂͒̈́̈̌̇̃͂̏̾͂͘͠ caused Nanachiu to die of a sudden heart attack after no longer wanting to be ridiculed by some girl. They then thought a good punishment would to be to trap her soul in and online prison. He turned her into his personal performer. She will be set free once the demon is either happy she has changed her ways or just kinda gets fed up of her being there.