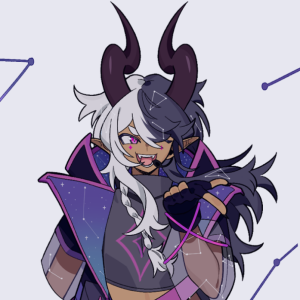 Mei-en Astraphel is a VStreamer and Vsinger specializing in rap music. Their character design is themed around a celestial dragon, with dark purple wings, horns, and clothes. They are known for their cool and charming personality, as well as their soothing voice.

Meien has competed in YFUBABY's StarStruck season 1, and is a team leader in StarStruck. They are also the first HoshiLive VTuber to have music on Spotify.

What is special about a star? There are billions of them. Destined to illuminate, a light against the Universe's dark tapestry. And then they die a glorious death, in light and flame and sudden dark.

Is that so glorious? Is that all a star is? A ball of flame shackled to its space, doomed to brighten the path of those who are free, while never being free themselves? I could not believe this was all my life could amount to. There had to be more... more than this. Perhaps the role is special, perhaps the job has meaning, but to merely exist is meaningless. This star wills itself to live.

So on one fateful occasion, what could this lonely star hope to do when the body of a sacred Celestial Dragon fell under their jurisdiction? The universe felt a great loss, and the sadness flowed through the dark matter like the rapids you might find on your Earth. But this star took up this final duty, and would not let themselves be swept away.

But... it was too much. Or they were not enough? Perhaps a combination of both; the sheer amount of cosmic energy, mixed with such potent life force, unmade this little star. And then, akin to a miracle, they were reborn. But not so swiftly. Over the course of a thousand years, the fusion of a star and a god took place, the space around them falling into inescapable darkness as their lights flickered out; only to be replaced with one that shone brighter than either being combined.

From the black sea, against gravity and through stardust, I, Mei-en Astraphel was born. Neither star, nor celestial dragon, and yet somehow both in equal measure, I cast off the cocoon of nebulae surrounding me, and drift, looking for answers; who am I? What am I? I wasn't even sure of how my name came to be, but I guess I inherited that from the memories of those who made me. My travels lead me to many worlds, and I learned many things in my time, yet none was more comforting than the place they call Earth.

On this planet, I like to indulge myself by taking part in some of their customs... whether it’s eating their food, singing their songs, or something... something called streaming. It’s nice to reach other worlds without having to fly through space all the time...