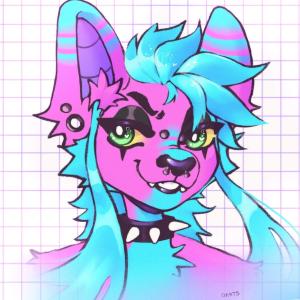 Matcha (they/he) is a non-binary, pansexual, and Canadian cyber-bat, VTuber, and artist that lives in your wi-fi. Their stream content most commonly includes art and adventure games, but they're also known to stream the occasional horror game. They lovingly call their viewers "bobats" ("boba" + "bats").

Matcha is five feet and seven inches tall. Their birthday falls on the 22nd of April, making their zodiac sign Taurus. Currently, he is 23 years old.

When it comes to personality, Matcha is often smug, chill, introverted, friendly and, sometimes, chaotic.

Matcha is a cyber-bat that lives in your wi-fi.