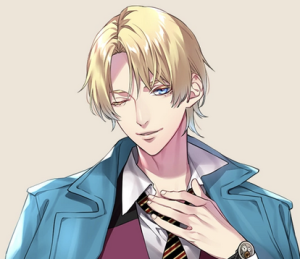 Louis Silvestre was a male Japanese Virtual YouTuber and a member of D-Prince!. Louis made his first tweet on 25 September, 2020. He made his debut on YouTube on 3 October, 2020. He revealed his Live2D model on 28 November of the same year. He was born in Yokohama. He enjoys doing ASMR streams and will also upload pre-recorded ASMR video shorts. He has shown, when in collab streams with fellow D-Prince! members, he likes to tease them.

On 3 December, 2021, it was announced that D-Prince! would be disbanding, with Louis, along with Kujou Taiga and Hanabusa Ibuki retiring at the end of December 2021. Louis held his last stream on 31 December, 2021.

Half-French and half-Japanese. The young master of a conglomerate. He's a ladies' man with strong French blood. However, he's a bit narcissistic with a lot of pride and often gets overly vain. His basic life skills are devastating. Also, since he was born, he has been living in an old Japanese ijingai so he cannot speak any French.