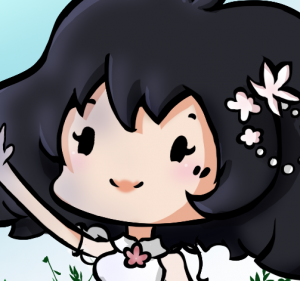 Letishia is a Virtual Streamer who speaks English and Spanish. Most of her streams are in English, but she is happy to switch languages if needed. She streams her favorite games and other games that she would like to try.

Letishia is the first daughter of the Weiss Family, a Duke House. She was loved by her parents and had two cute little brothers.

As a precelebration to Letishia's 8th birthday, the whole duke family went to the Fee Forest to have a picnic. While the parents were relaxing and talking with the head knight, Letishia and her siblings were playing hide and seek nearby the forest. She didn't wanted to be found, so she thought that hiding deeper in the forest, she could won. She started to walk deeper and deeper but never came back. Her brothers, after not finding her sister ran crying to their parents and tried to explain the situation. The worried duke and duchess sent all their available knights to search for Letishia, but not even a trace of her could be found.

Meanwhile, Letishia got lost inside the forest. It was lunch time not long ago, but the forest blocked the sunlight and it seemed like it was pitch black outside. Scared of the darkness, she started to follow small fireflies that were going deeper into the forest. After a while, the forest started to illuminate by a path of flowers that emanated light. This path led to a small hut, with a lot of flowers on the outside of the floor, walls and ceiling; close to a tree with windows on it. Letishia ran towards the house, hoping to get some help. She knocked the door, and a tall woman opened the door. She presented herself as Rosebeth, the owner of the hut.

It was pretty late, so Rosebeth invited Letishia inside to stay the night. Letishia was a bit wary about the invitation, but since she didn't have other choice, she accepted the kindness and entered the hut. It was beautiful, all kind of flowers were covering most of the main entrance. It was magical. Rosebeth guided Letishia to the kitchen where made the kid to sit on a table with some sweets on the middle. This made Letishia remember that she was hungry, so without thinking, she grabbed one of the candies and ate it. Rosebeth panicked and tried to stop her, but it was too late. Nothing bad happened, but Letishia asked why the sudden reaction.

Rosebeth explained that the Fee Forest is a forest of magical creatures. Usually, the human eyes are not able to see them but it would be different with the Magie Pill, which is what Letishia ate. This pill would allow the human to see magical beings and be able to communicate with them; but because of the greedy nature of humans, after swallowing the pill, they would be unable to leave the forest. This pill will make the user to depend on the forest energy and if they leave, that would mean death. Letishia now in despair that was unable to see her family again, started to cry and feel asleep.

A couple of years went by, Rosebeth allowed Letishia to stay in her house as a sign of forgiveness. The house was inside the tree behind the hut, it was comfortable and but Letishia took a while to get used to her new life. She learned that Rosebeth was a mix of human and fairy and that she is in charge of Cocoa's flower shop. A shop were magical creatures could buy special flowers, remedies and magical items. Letishia started to learn all sort of things from Rosebeth, that now looked at her as her possible successor.

After some years from their faithful encounter, Letishia now helps Rosebeth with the shop and started to stream to get to know the outside world.