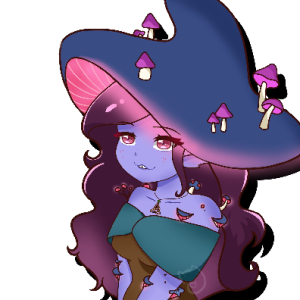 Leiishroom describes herself as a Mushroom Witch, but does not go into details over what that entails, specifically implying a lack of association with the Fae. She welcomes those who join her stream to a relaxing setting, often playing slower paced games, MMOs and other fantasy games. Viewers are welcomed to interact with her, particularly in the MMOs that she plays, particularly with friends that she has made.

She goes by Leii, and has collected nicknames based on pronunciations, such as Ley, Lee, Leshie, Leyel, Leilie and Lie. She identifies as Feminine, with She/They pronouns.

Described as a humanoid with lavender technicolour skin and a soft, velvety texture, Leilyn is noted for having several fungal growths that protrude from her form, such as the lower arm, shoulder and most notably, a pointed cap that resembles a witches hat. She is rarely seen without her teal Wool shawl, a satchel of various tools and ingredients, a leather bodice shaped into a leaf, and a simple, asymmetrical, teal dress.

Best described as cosy and comforting, Leii is known for her soft and gentle voice, her welcoming and friendly personality, and an affinity for soup and tea, eager to share with travellers. This doesn't stop her from getting flustered over the antics of folks, trying her best (and often failing) to not curse when things spook or set her back.

Leii's biology appears to be humanoid, but whether she is completely human, a mushroom in human form, or there is a parasitic or symbiotic relationship between human and mushroom is a mystery, perhaps even to her. Her skin appears to have the texture similar to portabella mushrooms, soft and velvety, but maintains much of a human's physical features including teeth, eyes and a tongue. She appears to need water and food like a human, noting a preference for soup, suggesting a parasitic relationship, but quips about planting her hyphae into plant litter, suggesting a symbiotic relationship. She does not appear to be in pain or distress, or finds the growths on her to be abnormal.