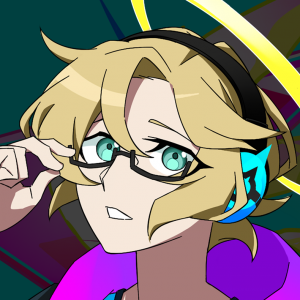 Kyublitz is a male YouTuber and Twitch Streamer who streams in English. His YouTube channel is a mix of his IRL and Virtual YouTuber content while his live streams are dedicated to the virtual persona version of himself. His live streams are well known for his Friday night VTuber-themed live talk show called "The Virtual Night Show With Kyublitz" and his Wednesday night live podcast series called "KyuCast" He also does livestreams where he plays video games such as Pokemon and Super Smash Bros Ultimate and chat while hanging out with his fans.

His birthday is 19th of December. His zodiac sign is Sagittarius.

Kyublitz was actually born a cambion, which is a half-human and half-incubus hybrid. But due to hell's law of no half-breeds, he was sent to earth when he was a baby. (His mother is actually a VTuber herself, and she's a Neko-succubus, ItsAnEmi is the name). After being sent to earth, he was raised in an adopted family. Pretty much raised in a normal lifestyle despite being bullied due to his speech. He is also legally deaf so he uses hearing aids to hear, they're under the headphones. (This is also a reference to IRL me being legally deaf with speech problems, I also hide my hearing aids under my headphones. The whole incubus lore makes more sense due to how in some IRL religions past considered that if a baby was born with a deformity or disabled, they are considered a crossbreed between a human and an incubus since those religions don't think a human and a human offsprings don't make babies who are disabled). When he got older, he eventually moved to California to pursue his dreams of being skilled in multimedia. (I'm similar in that IRL since I moved to California to become a video editor, a graphic designer, and a social media manager for other content creators, also do content creation myself, trying to get into other media such as music, and acting, and more!). But once he got to California, he met a strange "person" (Most likely an angel) and gave Kyu the power of "Space", but right now, it's mostly gravity-like powers like pulling people closer to him for example. With this power, he developed the "Halo" which is actually just a reference to Saturn's rings. Alongside developing the power, he basically has an alter ego that is finally "unleashed" aka Fallen which was the "incubus" side of him that was locked away, so you could say this mysterious person who gave Kyu's his power basically unleashed his incubus side of him. Fallen isn't considered "Evil", just more of a chaotic and mischievous side of him, like a jokester or some sort.

As he lives in California and sometimes travels around the world, he ended up finding his true family's history. Which is just basically his mother having a one-night stand or something. His mother aka ItsAnEmi basically finally met him after 23 years of explaining who he is and what he is. He still tries to have a normal human life... But things are getting weird I'd say. Now there's succubus roaming around knowing who he is, disliking him since he's a half-breed. He made a joke with his mother saying he could try to become the "Prince of the Succubus/Incubus" which is basically turned into an actual goal. (We kinda made this joke in a stream and we basically were like "Make 100 Succubus VTuber friends" to consider that.). Kyu makes some succubus friends in the lore, such as Erika, who wants to be a professional model but when they met, she was working as a bartender. Both of them became close friends and eventually roommates because you know, California's rent pricing is soo high... He also met Yui, which is another Succubus while he was traveling to a different country while working. And then he's been making more succubus friends and slowly developing a friend-like harem. Alongside that, he's a streamer, owns a late-night show, runs a podcast, and more.