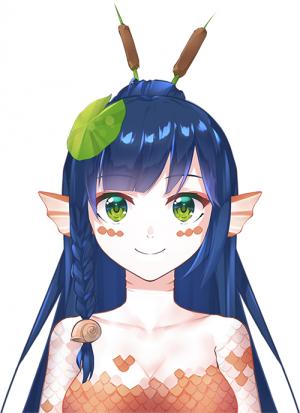 Koi is a female independent VStreamer who makes content in English. Koi includes educational content, often in the form of fun facts, in her streams and on Twitter. Her birthday is August 4th and her height varies thanks to 'mermagic'. Koi runs topic-based lessons on Teaching Tuesdays and themed trivia on Trivia Thursdays.

Scalebark was a small but growing mountain town known for its red spruce trees and local artisans who utilized their wood. It’s singular inn had been within the founding family for generations and featured a rather impressive koi pond. In the lobby was a solitary glittering coin displayed over the reception desk. A story passed down by the innkeepers told of the first customer and how the coin came to be the inn’s symbol.

When the inn opened its doors for the first time the owners were surprised that a traveler was already waiting. Wearing ragged clothing and carrying only the most meager of belongings he was welcomed to spend the night with open arms. Despite his appearance the innkeepers made sure his needs were met and even offered to let him lodge for free. The traveler refused and instead offered an old coin. He instructed them to display it and with that disappeared back into the countryside.

They often speculated that the traveler was no mortal man and instead the spirit of the mountain Scalebark was built upon. In particular the daughter of the current innkeepers was fascinated with the story. She would spend hours watching the way the coin caught the sunlight through the aged windows. The young girl was absolutely convinced it was something more than a bit of shaped metal.

In time Scalebark became a popular destination for tourists and the inn was constantly filled. Most of the customers were pleasant enough to work with save for a businesswoman that lodged semi-frequently. She was certain that the town and the inn was a golden goose just waiting to be taken. And because of this she returned time and again with new offers to purchase the land.

Most turned her down but the allure of money became too much for others. Her persistence whittled down those who resisted and soon she owned every property… except the inn. The owners had no desire to leave their ancestral home and made it clear that any offer would be turned down. Realizing she wouldn’t win by money alone the businesswoman resorted to more underhanded tactics.

Phone calls were made, money changed hands, and the innkeepers were informed their land deed was invalid due to a clerical error. They fought against it but by this point the town was all but owned by the businesswoman. The family was suddenly forced from their inn and with heavy hearts traveled to live with distant relatives.

Construction for the new resort town began in full almost immediately after. Buildings that existed when the town was founded were torn down and replaced. Large swathes of trees were felled to prepare for a ski section. The inn itself was demolished and a multistory hotel was being built over its remains. During demolition the coin landed within the koi pond and was promptly devoured by an opportunistic fish.

The latent magic within the coin transformed the fish into a mermaid who watched the destruction with new found intelligence. But her control over the mountain spirit’s gift was sporadic at best. She bided her time, learning her powers, and waiting for the opportunity to set things right. And so for months the resort town continued to be built, unaware of the brewing danger within the koi pond. Until one night several workers refused to return to the construction site.

They claimed to have seen some sort of large animal throughout the night and no longer felt safe to continue working. These sightings grew and grew alongside increasing amounts of property damage until the businesswoman could ignore it no longer. She hired a hunter to remove the beast by any means necessary.

The hunter repeatedly tried to capture the beast but found any time he had the unknown being in his nets it would seemingly disappear. And any attempts he made to reveal its identity were met with similar failings. The lack of results infuriated the businesswoman and she instructed the hunter to destroy the entire area. Maybe then the creature would be removed and her progress continue.

Not comfortable with the amount of flora and fauna that would be caught in the destruction, the hunter refused to do as told. It was then that the woman took matters into her own hands. For months she had suffered heavy losses and if construction didn’t resume soon she would be bankrupt. And what was one patch of land in the grand scheme of things?

Nobody knows exactly what happened that day but they saw the results. A mudslide destroyed the mercifully empty buildings and all efforts to rebuild Scalebark were abandoned. For years the ghost town was left to be reclaimed by nature and neighboring settlements warned not to travel to such a cursed place. Such warnings only emboldened the young and several curious teenagers explored the remnants.

Most had an uneventful experience, others made up stories to add to the growing legend of Scalebark… But a special few saw a glimpse of something more in the koi pond. And one such encounter led to a curious mermaid getting ahold of a cell phone. With it, the largely solitary life that Koi led protecting the town was made a little less lonely.

She rejoiced at the seemingly endless information the glowing rectangle provided. Using her mermagic she was able to connect in ways unimaginable. And she delighted in sharing what she learned with those who would visit her new digital extension of the pond… As well as occasionally indulging in the entertainment created by the humans she interacted with.