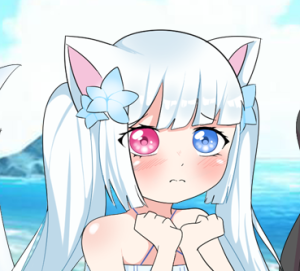 Kiyomi Kitsune is Asian SGVTuber . Her Main Language is English! She Doesn't Use Singlish. She is Muted And Very Shy Vtuber . She Sometimes Finds It Hard To Say A Right Word To Viewers But At Least She Tries Her Best. She Does Streaming Whatever Game She Like.

Kon was originally human. When she was 12 she met a Silver Fox in the morning at the Inari Temple. Kon was shocked at how the mysterious fox was able to speak.

As the Silver Fox had asked Kon if she wanted to play Hide and Seek, Kon had said yes. For the next 3 hours they became friends and would visit the Inari Temple.

4 months after Kon and Silver met. there a girl with red eyes and black hair, her name was Amaya Tomita. Amaya asked Kon how she met the silver fox.

She told Kon she met the black fox at the Inari Temple at night. Amaya and the black fox invited Kon to an amusement park where they would spend a lot of time.

Amaya told Kon that the Black fox and her would come to the Amusement Park until an unknown gang of villains came and wanted to kidnap children.

The villains would kill all parents they came across. When Kon and the Silver Fox wanted to leave, Amaya and the Black Fox refused to leave as there was another path. But Kon knew that the forest was dangerous to hide in.

The Silver Fox kept asking Amaya to not go to the forest, but she refused. While Kon and the Silver Fox went down a different path, Amaya and the Black Fox went into the forest. Amaya ran into a villain attacking a fox, but she ended up protecting the fox.

Amaya was bleeding from the attack, but the villain decided not to kidnap an injured child and went off. Amaya was close to death until the Black Fox decided to do something about her.

Meanwhile, Kon was on the way out of danger until the entire gang of villains surrounded her. Kon had no idea what to do until the Silver Fox used the Mystical Fire to clear out a path. Kon and the Silver fox escaped safely. When they returned to the Inari Temple. the Silver Fox had no fight left to live, as she used all her power to save Kon. She was crying hoping there was a way to keep the Silver Fox alive knowing its almost impossible. Until and unknown Inari Fox's voice told her via telepathy that the only to save the Silver Fox was to merge with her.

However, she won't remember the time she and Kon spent together. Kon had agreed with Inari Fox's offer and merged with the Silver Fox. Kon ended up being Half-Human and Half Fox. Her parents dislike how she looks and threw her out of her home. They only saw Kon as a monster.

She was living on the streets until a lady came to adopt her. As the lady was working as a teacher she decided to take Kon in and will be living with her new parent.