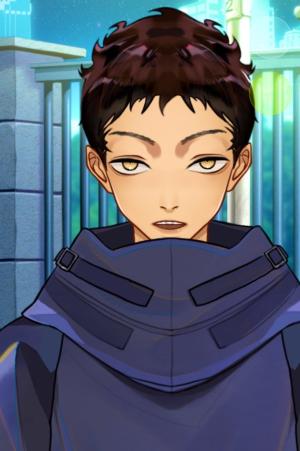 Joon is a male who had decided he needs to get out of his shell and explore more and see and meet more VTubers in the world.

Joon was created from a shower thought in the mind of a tortured severely depressed old aged artist who’s life was tragically destroyed at the age of 13... At this age of his existence he was captured and held captive by his kidnappers... His captors forced fed him a fruit that is considered forbidden in his world. This fruit was named “Eindwel”... (indwell)

Eindwel was a putrid smelling fruit with a lingering miasma, it made anyone who eats it vulnerable of being controlled beyond their will, the consumer felt euphoria and high creative expression temporarily but in exchange for 30 years of your life each time you eat it.

His captors forced Joon to create very convoluted art. For each specific ruler on the prison like grounds, captors had the power to send themselves into any art they wanted but they must spill a drop of blood onto the art or painting , claiming it and making it their own escape or simulated experience. So with this, his captors were obsessed because entering an artifact with very complex auras or detail was like a drug. Joon was the only artist to ever be able to surmount the ruler’s immensely high expectations.

The rulers of the captive grounds had Joon create 32 artifacts and eat 32 Eindwel within the time frame of a week... before one night he managed to get away. All the rulers had “escaped” into Joons creations for them and while oblivious , he took his chance to leave but his old body made it difficult though successful.

He escaped the captivity and returned to his parents but upon his return he discovered that his parents gave him away for fortune promised by his captors.

They saw his old aged body in disgust and threw him out of their new golden pyramid palace of a home. Shouting that they have all they need now thanks to his mind giving him over to be a slave and the fortune it brought upon them.

Crushed by this realization... he felt utterly defeated...driven to insanity... The ancient artist begged the creator of his universe to be taken away from his misery he wanted a new soul... His aged and brittle body was very weak and almost useless from the Eindwel, Joon just wanted to cleanse his body from all the things he has been through, in hopes of washing away his sorrows...

Joon discovered a waterfall on his parent’s land behind their palace.

He thought maybe he should just go there, shower and cleanse himself and to rest forever as he felt like his time has come.

the creator of his universe blessed him with “Another Chance”. He was given a new unique youthful appearance and new “life” but he could not be given a new experience or mental state of all the sorrow that has happened to him in his past life...Joon was sent to another universe, through “ ˈbo͞oməˌraNG ˈnebyələ “ a mist light years away to reach a new destination. This action was sort of a curse/blessing due to passing through the nebula, it froze all old memories of his past and he is stuck with them. This will forever dwell on his mind unless there is a “Kyooer” created in the future.

Joon suffers from night terrors, fatigue, flashbacks and crippling depression, anxiety almost like agoraphobia / PTSD, migraines, he calls them “Sephirothing” from his past experiences, currently but he uses his hobbies and interests in hopes to get his mind off of it all.

Although Joon looks very young he is actually 990 years old. He’s set out in search of a community thats welcoming and shares similar interests , even if they don’t have similarities, he’d like to discover and be introduced to things. As he has an inquisitive mind.

It takes Joon a lot of effort and a little while to open up and get to know people but once that shell or wall is broken down and trust or he feels more comfy, he’s very funny and helpful to anyone in need as much as he can be.