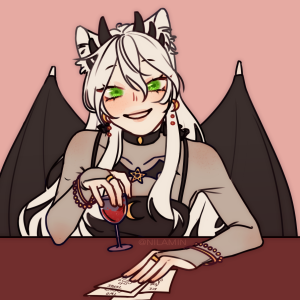 Lady Mana, aka Lux, is a cozy VStreamer who often does free tarot reading streams and plays fun lowkey games. Some cozy games included are Spiritfarer, Cozy Grove, Unpacking and many other indie games. Lux also occasionally does cooking streams on the weekends. During Autumn times, she can be caught playing games like Dead by Daylight and Phasmophobia. Viewers have mentioned that her voice is very relaxing, even when variety streaming gets a little chaotic with games like Fortnite.

Streaming independently twice a week since first debut, Lady Mana currently streams every Tuesday and Thursday at 7pm EST and occasionally on the weekends.

Lux has casually used TikTok for some time but since August 15th, has been daily posting original content to the app on weekdays. She accrued 2k followers on the app in just 2 weeks and has since made a highlight video on her Twitch to give an in depth look at her TikTok editing process.

Lux's goals include being noticed by the god Loki, making an original song, surviving a 12+ hour stream, making new friends, and finding a sense of belonging.

Timeline: Lux's first VTuber debut was on August 16th, 2021 on Twitch, debuting with a chibi style model. Welcomed into the VSerenity Twitch team on August 25th, 2021. On October 31st, 2021 she debuted a new full body model that's used for tarot stream and frequently on TikTok. On April 5th, 2022, she debuted a second outfit for her full body model and released her first song cover. On August 16th, 2022, she debuted her 3D model that is currently used most often on stream.

LadyMana is a shapeshifter who's current true form resembles being part human, part cat, part dragon. She believes her father is "probably definitely" the god Loki, as she's experienced other immortal traits over time such as fortune telling. She aims to stream and practice all her skills in an attempt to garner the attention of Loki so she can ask him all her burning questions. She also takes a lot of pride in her "gap moe" appeal.