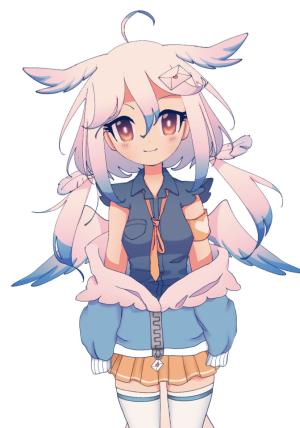 Inkobox (full name Inko Kamome) is an albino quaker parakeet vtuber known for playing simulator games and doing regular digital art streams. She enjoys gaming, drawing, singing, gardening, and has an extreme passion for birds and all things bird-related. She is known to be very sleepy most of the time, and loves taking short naps after a good snack or a long stream.

One day, a flock of quaker parakeets came across a box containing an unusually large egg. They all helped care for it, until out hatched a strange half-parakeet baby. Since her feathers were all white and she had red eyes, she stood out too much in the flock of all green parakeets. Eventually she left and joined a flock of seagulls (adopting the last name ‘Kamome’), but realized after a while she hated eating fish, and scrounging around for food elsewhere.

Seeing no other options, she got a job as a postal worker since she could deliver letters quickly, and took on a normal life among humans. However, her bird instincts got the better of her, and she was later fired for tearing apart letters for “nesting material”. She kept one letter that she wears on her head, but no one actually knows who it’s to, from, or what its contents actually are (though she claims it’s an exorbitant water bill). Still needing to make money to survive, she began her life as a streamer, and tries hard to make friends and have fun.