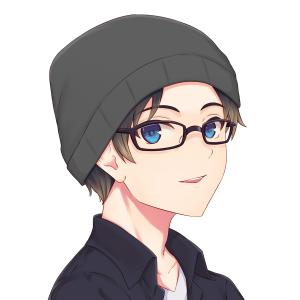 HvskBrew (Husk) is the owner of The Graveyard Bar, a bar that welcomes everyone! Hvsk also is the bars bartender and barista (in-training/self taught), and serves drinks to his patrons while getting to know them.

He was a wondering body walking down the dark, dimly lit streets. Never satisfied with what he puts out in the world, barely proud of what he achieves. 23 and unsatisfied, he reflects on the past years of his life and thinks, how much he should've taken risks and chances that were once in a lifetime, instead of going with what felt right or what fitted. He never did anything for him, for what he wanted, and instead just chose to do everything, with a mask covering his face. For once, he takes a different route, a different turn. Just, to see something different, have a different experience. Walking aimlessly, he didn't realise that they were lost. but at this point, they didn't care. It was still all the same, as if he took the same route. Closed stores, covered in darkness, asphalt on the floor, streetlights buzzi- Something caught his eye in the distance. A stairway, boards strewn across the concrete sidewalk. Every step closer a story begins to be told. Run down store. Countless attempts of vandalism and graffiti. Broken bottles scattered. The scene tells the story; a run-down bar. A shell, unable to survive the test of time. Intrigue by the state, and by former dreams, he walks down the trash ridden stairs and pushes the unhinged door open. Shelfs, covered in broken glass. A pool table, somehow snapped in half. Light fixtures hanging from the ceiling, and the stage having boards stripped and torn apart. He looked at the destroyed state of the bar. He felt something though, that he hadn't felt for a long time. Not just one feeling, but multiple. He feels, for once in a long time, that he is invested in something, that something has been presented with him, and that he is invested. And that feeling is even stronger with what he feels like he has in front of him. He feels challenge has been put on him, and that makes his stoic face, turn a hint of a smile. (More added soon)