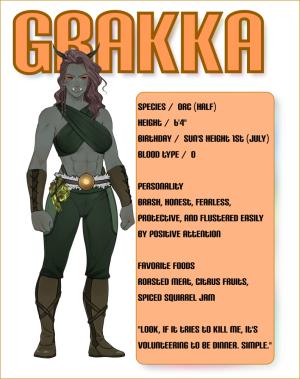 From her Twitch page: "Your rough n tumble Orc big sister is here - Grakka the Daedra Hunter! Expect PG-13(ish) violence, laughter, & general variety shenanigans. Live every Wednesday at 6pm PM PST, and whenever the heck else I wanna!"

Grakka is a female L2D Vtuber on Twitch who streams in English. Her art was done by wintercoco, and her rigging was by mrk_22. While she started out as an Elder Scrolls Online streamer, she often plays variety games, especially when collaborating with other Vtubers.

Grakka is one of the founders behind the New Year's Monster Mash event, and has recently announced a new summer-long Survivor-style project with the working title "Clone Summer."

Grakka began as a D&D character, starting as a 3rd edition character and later updating to Pathfinder. She was a half-Orc Earth Genasi, the granddaughter of an Orc chieftain named Thrall (yes, Grakka's DM borrowed the character from WoW.) At the start, she was a pure Ranger under the effect of three curses, one of which made her instinctively distrust everyone. The result was a withdrawn, surly, and very difficult member of the party to get on with. After an adventure through her psyche (where it was discovered she had three superpowered orc children as guardians of her mental landscape, the Grakka Gruff Girls), the curse was lifted, her newfound psionic abilities made her a Ranger/Soulknife multiclass, and that was when her personality began to shine - confident in her strength, protective of her friends, caring of those in need and insistent in helping them discover their own strengths, helping several NPCs up into positions of leadership in their own societies.

Grakka was rewritten for Vtubing to be an Orc from Elder Scrolls Online (also called Orsimer.) Her official backstory is shared on her Twitch page in the form of a song, below:

(to the tune of "Fresh Prince of Bel-Air")

In Malabal Tor, born and raised //
Huntin Daedra is how I spent most of my days //
Slicin up bashin smashin those fools //
Shooting bows with mom and grandpa, things were all cool //
When a couple Dremora who were up to no good //
Started makin trouble in our local woods //
Our camp got attacked and my mom disappeared //
Gramps said "We're moving down to Elsweyr til you're ready to be feared" //

I trained out in the Western Plains for many a year //
Til I outmatched my grandpa, he looked up with a tear //
Now I know I cheated, and that fight wasn't fair //
But he said I beat him - "What I expect from my heir" //