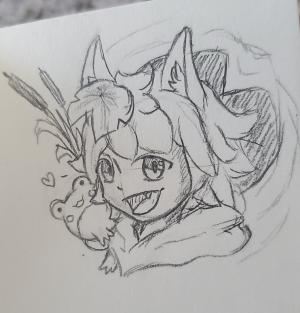 Galaxymoonlite is a wolf boy streamer. He plays all sorts of games and loves to draw. Furthermore, Galaxymoonlite is a unusually patriotic about his birthplace, Quebec. Vulgar in tongue and reckless in thought process, he is fairly bad at most games he plays. He often jinxes himself and makes wrong inferences constantly. To top it all off, he speaks french!

Galaxymoonlite is a wolf boy streamer who is comically unlucky. Having been skilled in most things in life, he found out he wasn’t so dexterous with video games. He quickly degenerated into a vulgar spoken neet who rarely sees the sun.