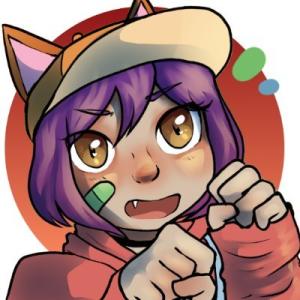 Backstory: Flufficus is a creature that has existed since the beginning of time assumedly. They function similarly to a phoenix in that when they die they are re-born, the only caveat for Fluff being that they have no memory of their past life. So when Fluff's past life ended up stranded in a cyrtid pocket dimension and died, Fluff was reborn in this dimension with no knowledge of human society, their only knowledge coming from a diary their past life left behind. Eventually Fluff became close with a powerful cryptid that allowed them to experience human life, under the one rule that Fluff begin to amass an army for the being, to one day bring about the apocalypse. Fluff, being thirsty as fuck for the cryptid and also a stage 5 attention whore, immediately started streaming to amass their army.

Creature: Fluff's origins are unknown, and though they share similarities to some creatures of different folk lore, they are not any of these creatures. Fluff's default form is a large fox being, but often Fluff likes to take the form of a human because of their intense enjoyment of humanity, their form can change in any way they wish, except for their ears and tail, those being the only two things they cannot change. Age does not work the same for Fluff as it does for humans and they've existed in a plain where normal time does not exist, but by best estimates Fluff, as we know them in this life, has existed for at least 122 years, though they have the mental age of a 22 year old.