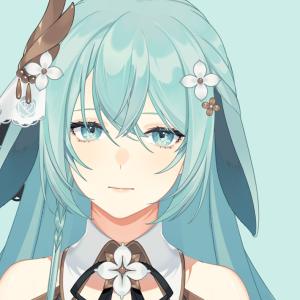 depths is a female English-speaking content creator who started streaming as a Vtuber on September 6, 2021. She is signed under the e-sports organization Cloud9 as a content creator, announced on September 27, 2021. Her Twitch channel is focused on Variety content and also features a live pet cam of a lionhead/rex rabbit named Luca. Her streams can be described as mostly grindy/endurance content with the average stream being around six to nine hours. The streams also feature fashion content and serve as a music stream/hangout stream. When depths isn't streaming, she is often bunnyhopping in Counterstrike: Source, creating digital art, sleeping, or working on League of Legends decay games. She ended Challenger multiple seasons and peaked Rank 11.

depths's birthday is November 17. Her Sun sign is Scorpio, moon sign is Virgo, and rising sign is Cancer. depths claims her height is "unknown." depths also shows no preference for any pronouns and identifies as asexual. Her MBTI personality type is INTJ, and socionics personality type is ILI-Ni. Her enneagram type is 4w3-5w6-8w7 SP/SX.

depths or Katrina/Ina is a human girl who slowly becomes all of the things she loves. She tries to live a life based on personal meaning, and she is shaped by the ideals of her parents and her own wishes. Her appearance changes in order to fit that.

Her aesthetic features a sea theme inspired by her father, symbolizing the ocean/fishing trips they took when she was younger. Her father often wore golden anchor necklaces, and loved the song "Ocean Deep" by Cliff Richards. Her father and old bunny (Yuely, also a namesake to her dad) both passed away in 2021 and she grew Holland Lop ears as a result.

Her full name is "dead sea depths." Her nickname and short-form name is "dead seas" which signifies the harder times she doesn't let herself forget because she believes it makes her who she is. The pixel world shown in her graphical depiction features a group of ruins with some plant overflow, alluding to the symbolism of life/death/resurrection. The paper boats all over also contribute to the non-living aspect of the world and the new moon in the sky is symbolic of the second chance one is given over and over again. depths also wears Dogwood flowers--a symbol of rebirth and strength.

She currently lives on the map bhop_desolation2 by fLume.