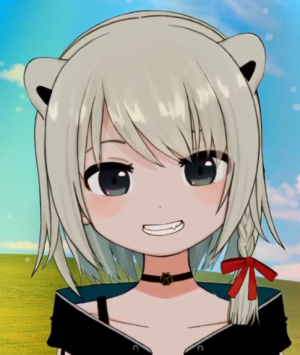 Beatani is a polar bear who is streaming and making videos on YouTube primarily for the English speaking audience. She is a variety streamer who is willing to try out any genre of games. She likes to interact with chat and often tells stories of her experiences, explains parts of Japanese culture or shows elements of Japanese media to her viewers.

Beatani is a 25 year-old polar bear that used to be an average office worker, until her sister, Chihiro, threw her into the internet on October 2019 as a result of a fight and trapped her in there. After that, she started living on the "XP hills" (for reasons she herself doesn't know), a term she uses to refer to the hills that appear in the default Windows XP background picture, Bliss. One of Beatani's goals is to escape the internet after reconciling with her sister.