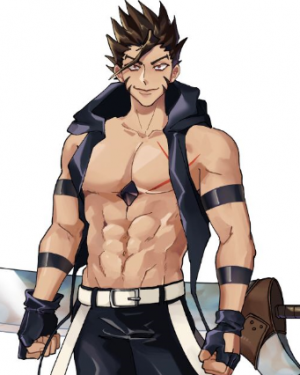 Born during the ancient times of Greece and the Age of Gods. He had originally been found dead, having sacrificed his life to save someone else from a monster. An old mage had resurrected him with the power of a magic black gem he had created through advance alchemy which he had then fused it in the body's chest.

With the power of the gem, he can absorb magical energy, electrical energy, and radiation which is then utilized to empower his physical combat capabilities passed superhuman levels.

The power within also keeps his body in his physical prime along with enhanced regeneration, so he does not age and cannot die by normal means. He has been alive for centuries and now occasionally hunts monsters that still exist today and hurt humans.

In his past time, he plays games and streams on twitch.