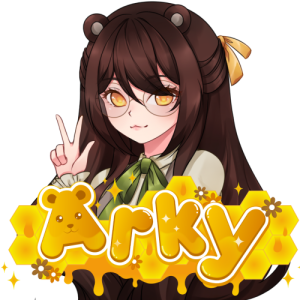 Arky is an independent Sun Bear English VStreamer, known for her bubbly and friendly personality and un-seiso moments. She currently streams on Twitch and looking to branch onto Youtube in the future. Arky currently streams 3 times a week in the evening Eastern Standard Time. She plays a wide range of games, from RPGs and Sandbox games to Indie Games. ﻿ She loves peanut butter a little too much and enjoys wiggling her bear ears for her community. Arky is 5'0" (152cm) tall.

Arky's earliest memory is waking up in a conservation laboratory. She doesn't know how she got there, where it was, or who she was before she woke up. Without any answers from the Scientists on how she ended up there, she believes she may have been born there as some form of experimentation and her loss of memory was intentional. She was given the name Arkeria Urska by staff and even took on the nickname Arky.

After enduring years of unknown testing and experimentation, Arky escaped the lab in the pursuit of knowledge of who she truly is, as well as her life before the lab. After running for what felt like weeks, she found an abandoned cabin deep in the forest far from the reaches of humans to avoid their cruelty and the possibility of returning to the lab.

After the restoration of the cabin, adding her personal touches, and starting a garden to sustain herself, Arky began searching for her answers. She began streaming to meet more people like her in hopes to find the true answer of who she truly is as well as her life before the lab.