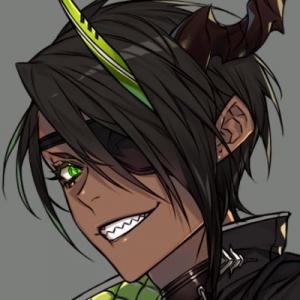 Aragami Oga (荒咬オウガ) is a male Virtual YouTuber who makes content in Japanese. He is endorsed by hololive's branch Holostars. Oga is a member of their third generation alongside Kageyama Shien, which was previously known as"TriNero"(トライネロ) prior to Tsukishita Kaoru's retirement. Oga and Shien then became known as "MaFia" (魔フィア). His birthday is 15 January. His height is 192 cm ~200 m (giant form). He weighs 90kg. His zodiac sign is Capricorn.