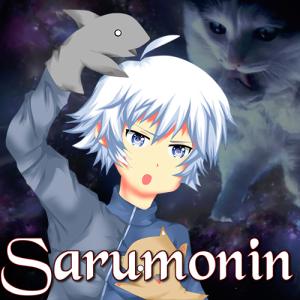 Sarumonin (born during the Winter time, in the early 1900's, according to lore) is a VTuber that focuses on gaming, mostly known for his work on TERA.

Saru was born in Puppet Town, a home to a group of magicians that has the power to control humans through the trick of puppetry. After defying the President of Puppet Town, Jimmy McBobby Jones, he was sentenced to exile. Saru was thrown in isolation, where a group of Puppet Master Bros (a cult of magicians with dark and weird magic) used their Puppet Magic to turn Saru's hands into the two things he loves the most, cats and dolphins. After this painful encounter, Saru travelled as the years passed by and yet age he did not. As a consequence, with the time that has passed, so had pieces of his memory. Saru has been seen talking to his puppets, even though they are his hands, because of the voices he hears from them. In reality, the voices are just him whispering to himself, but time has not been kind to his poor mind. Now, Saru plays games to pass the time even more so, ironically, and hopes to one day recover his hands.