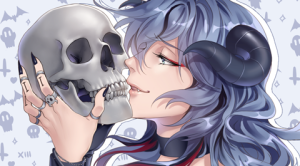 Nékir is a male demon VStreamer who usually plays horror games while viewers can scare him using different sounds. He streams mainly in Spanish but he also answers in English to those viewers who wants to practice their Spanish or they don't know the language at all.

His community is very welcoming and warm with the new members of The Dungeon, so you will feel part of a family very fast.

I still remember that day, even though centuries have passed ever since. The beginning of a life condemned to darkness. What? You thought I was born as a demon? You are wrong, I was human like you and my only sin was "angering the Lord with my heresies and condemning all the people to the wrath of God". It sounds stupid now, but it didn’t five centuries ago.

My "sin’s" name was Kurien, he was part of the Royal Guard, while I.... well, I was just an artist's apprentice who was sometimes hired to paint unimportant portraits.

The secret of our relationship was a heavy burden for more than seven years and we had been saving up money to flee the country. But all our plans went down the drain. I still don't know how we were discovered, it all happened too fast.

I remember the pain in my lungs from running, the barking dogs trying to hunt us down in the forest and the screams of angry villagers. It didn't take long for them to catch up with us. Kurien was beating them with all his might to get them to let us go, but they pinned us down, our own friends took us to the authorities. There was not even a trial, only the sentence to capital punishment, but not without first purifying our sinful souls before that. I don't even remember how many days it was, I lost track of time locked up behind those four walls.

At first I prayed, I asked God why was my love a sin, but the torture and humiliation that his faithful dogs did to us not? I begged Him to forgive us, to send someone to stop all that... but I never got an answer. I had never felt a greater hatred growing inside me than during those days. I didn't know if it hurt my body or my soul more, and as expected, so much darkness attracted something even darker.

It spoke in my ear day after day. I was convinced I was going crazy.

The day of the execution came and I couldn't see Kurien anywhere, I remember my heart shrinking, I wanted to see him one last time before I died. My eyes searched desperately for him through the bars of the cells we were passing. "What you are looking for is outside waiting for you", the tone in which the guard spoke gave me shivers, I expected the worst.

Once outside I tried to enjoy my last breaths of fresh air as I headed towards my destiny. I looked up as they put the noose around my neck and then I saw Kurien’s body exposed on one of the walls as a warning.

That being of darkness appeared again at my side, he was cunning, he knew that now I would accept whatever he offered me. It was not even necessary to converse, I just looked at him and nodded with the little strength I had left.

The executioner activated the lever that was going to take me to death, but as soon as my body was suspended, it began to burn to carry out my metamorphosis. It is surprising how burning in the very own flames of Hell itself hurt less than I expected. I fell on the ground and people began to run away in a wild stampede, pushing and stepping on each other.

I went into a frenzy and began to hunt them down no matter who it was. I remember the metallic smell of the blood I was spilling as I went, but I prefer not to go into details. Still, it's not something I'm entirely proud of.

I carefully put down Kurien's body on the floor, wiping his face with a damp cloth. My brain didn't want to believe what my eyes were seeing. I couldn't even cry, all I did was shiver as I ran my fingertips over that beautiful face that was now cold and barely recognizable. I hugged him, cradling his body in my arms and pressing a kiss to his forehead.

"Bring him back", I pleaded with the demon, to which his response was a laugh. "That was not our deal. I offered you revenge, not to bring him back to life. Now you must come with me." , he replied without losing his smile. "Is he there? In Hell?" I dared to ask like a naive fool, but his smile widened further. It was obviously a no. That's when my world shattered into pieces and the tears started to flow. It wasn't possible. I didn't want to believe it.

"I want to make another pact!" I screamed. That being looked me up and down with disdain and simply turned around, ready to leave. "You have nothing left to bargain with me." "I will collect souls for you!" , that seemed to interest him. He stopped and looked over his shoulder, staring at me with those cold, yellow eyes. "Every 5,000 souls you bring to me, I'll let you stay with him for 24 hours." That was too many people to damn, but if I had to spend an eternity in Hell anyway, I had nothing to lose... If I could see him just one more time, I'd settle for it.

"I accept the deal."

So many years have passed that I feel that his face begins to fade from my memory.... Sometimes when I try to draw him I feel that’s not the face I loved long ago.

I am terrified of forgetting him...