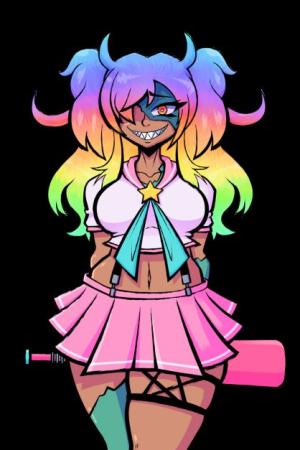 Ghoulie is a former magical girl now zombie. After coming back to unlife and some misunderstandings, they now reside in the basement of the Scarlet Necropolis (a crypt their friend owns). Between handling a trio of zombie maids and getting into antics with their friends, Ghoulie streams a variety of games. They primarily focus on indie games with the occasional dash of pokemon.

Ghoulie was once the leader of a magical girl squad. They all went to school together, fought crime together, and defeated bad guys together.

They just didn't get to die together.

Against a powerful lich-lord, the friends fell one by one until only Ghoulie remained. Out of desperation and anger, Ghoulie absorbed the powers of their fallen friends.

Overflowing with power, Ghoulie defeated the lich-lord. But at the cost of their body and mind. And of their world. They accepted their death, as they lied there dying.

Until a portal opened and mysterious figures emerged. They picked up what remained of Ghoulie and their friends and transported the remnants into an alternate universe.

Stitched back together with the pieces of their friends, Ghoulie is brought back to life.

But under the control of an unknown necromancer.

And for what purpose? To kill rival necromancer: Scarlet Magus.

The fight ended with both severely wounded. But it was what Ghoulie needed to regain control over themself.

Taken in by Magus, Ghoulie now resides in the Scarlet Necropolis.

Now stuck in a universe similar to their own, Ghoulie builds themself a new unlife. Playing games, pranking Magus, and making friends; many of whom who were former villains Ghoulie has fought.

And while Ghoulie's former squadmates are gone, echoes of them reside within Ghoulie.