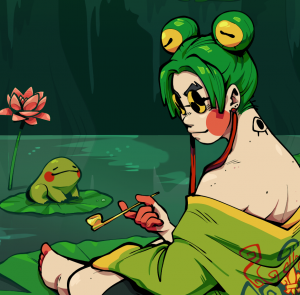 AL, also known by their job title - Frog Sage, is an English-speaking independent variety streamer. They primarily stream digital art. They also stream games ranging from classics to indies and even occasionally do educational streams. Their stream generally keeps a down-to-earth and relaxed atmosphere and frequently hosts guest co-streamers.

Frog Sage is a hermit living in a swamp that's difficult, but not impossible, to access. It's a liminal space that appears to those that need rest. The swamp is also home to Haichan, a fellow frog sage that primarily appears in animal form, and various wild life including brightly colored grubs (which sometimes appear on stream as Stream Avatars). It's not known how Frog Sage came about this residence or occupation, but they seem similar to the tales of Liu Haichan and Jiraiya the Gallant.