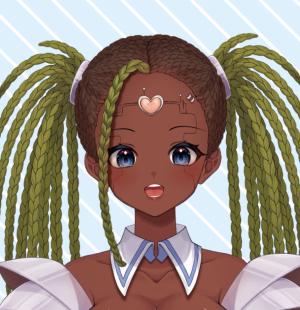 Ani is an Android VTuber / V-Singer who makes content in English and Japanese. She enjoys playing tilting games because of her pride in being a real true gamer, even though they are often thankless and full of pain. These include games like Smash Ultimate, Jump King, and Dark Souls. The only games she plays that aren't extremely infuriating are probably the JRPGS she plays, but those tend to be extremely difficult as well. She does write fanfictions on stream and sing karaoke, and also composes her own music. She also enjoys horror games and has never gotten scared once in her life.

In 3099, the environment is so decrepit on Earth that the whole planet’s now covered in a Dyson Sphere-like metal coating. Life on Earth is still operational, but androids are an integral part of human life. They exist in the home, construction, customer service and a myriad of other occupations. Robots, androids, and other automata have been living in peace with humans for over 500 years, and peace has prevailed for the centuries.

In the Lab of Dr. Larc, an illegally engineered android by the name of AndroMeida3099, or Ani Meida for short, is created to bridge the gap between humans and automata, because there are some humans that don’t think that robots are necessary - and some robots that don’t think they need humans. Dr. Larc realised this conflict was brewing for years before him and during his life, so he created Ani and illegally installed a few extra addons into her so she could bridge the gap.