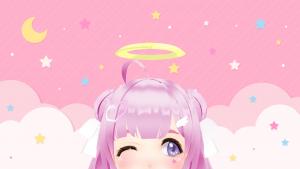 Hunnii is an angel who came to the earth to make friends, she considers herself virtual because she streams from the heaven, she also has a virtual interface named Shiisa, like phones interfaces

Hunnii came down from heaven to get to know humans closely, but due to the different conception of time of being an angel, she spent three months at home playing video games. She met Rei Tengan, her senpai, Momo makino and Vicktoria Rosebloom and they're all part of Spicy Sugar, the first italian virtual youtuber idol group. Then they made the NIIA-Vtubers partition, the first association for Italian Vtubers. She also met DammAntrace, a guy she met while playing videogames, and his depressed life made her thinking on being his guardian angel. Her power is named "Pixel Star", she can enter in any type of electronic device, make holograms and stuff like that. Because of that power she made a friendly interface named Shiisa, a pet with a purple wi-fi symbol on his forehead. She likes pink, sweets, memes and sweets, her bunbuns remind of macarons sweets. She doesen't like bad jokes, plot twists and sad people.

She has a power button and motherboard circuits because when she first discovered her power " Pixel star! ", because she wanted to help her human friend so much that her wings did a pixelated 8bit light and she got thrown in her computer, and then, she was there, to her friend's Antrace house.

But because of that, she can get a little bit glitched and her eyes can move in a weird way, she says she didn't got the "new patch" yet!