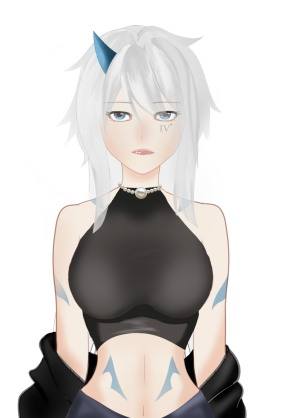 Zu'ra is a Vtuber & Vstreamer who hangs out with her fellow college student Kamito. They mainly play videogames, watch videos and hangout. Their backstory can soon be read on their other social media platforms.

Her favourite Videogame is league of legends, somehow. She wonders how she can enjoy the game so much.

Zu'ra was once a normal little girl with loving parents, without powers and in a normal school. On one gloomy day, the newspapers arrive, revealing that a group of kids from the ages 6 to 12 have been abducted by an anonymous group. One child from that group was the unfortunate Zu'ra Kazuna.

After a few years with no sign of the missing children, the town gave up and mourned for the lost children. During these years, the children endured harsh trials; Zu'ra and 6 other kids from the 20 got through those trials. Each of the 6 children got incubated in their containers, slowly mutating into machines with their own unique powers, used for experiments and missions, hidden away from society.

The students who were once small children are now full grown adults/young adults, trained to serve the secret organisation, with each having their experiment number tattooed somewhere on their body. Zu'ra is one of their top assassins with the power of controling any liquids (Her main element, water and her least used, blood.) Though she's the symbol of their assassins, she is one of the only experiments containing just a sparkle of human emotions and thoughts. Zu'ras appearance has changed a lot throughout the years without sunlight and the constant experiments with DNA and toxins. The once rozy cheeked bubbly girl with rich brown hair, warm hazel eyes and warm undertoned white skin, turned into a woman with pure white hair with a blue horn poking through, cold white skin with no marks and icy eyes. There was one thing she chose to change about herself; her tattoos. She chose to have tattoos on her abdomen, upperarms and shoulders, so she could feel like she had more control over her monstrous appearance and make it more like she wanted.

The experiments are held in class X in the college of heroic futures, but the class is unknown to everyone except the heads of the school that are linked to the organisation. Zu'ra among a few others of the class get more and more curious as to what is outside of their locked down area, since they may never see how they got out to go on their missions. One day, when Zu'ra went on her training to control big pools of water, she caught a glimpse of a young male in his dorm window whenever she woke up from her narcose, but quick after got knocked out by the guards transfering her back.

Once Zu'ra was brought to her room, she sketched the face of the male she remembered from her training and looked at it all night, wondering why she wasn't allowed out at any time, or talk to anyone outside of class X or the professors. She then found her new obsession: 'Find who the male she saw was and find out why she may never go outside of the locked area.'