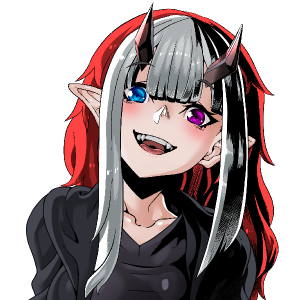 Kaminaga Zumeya is a female succubus Vstreamer. She is known for being crazy stupid and saying poggers in every sentence. Often, she will bring up stories about her life in Hell before coming to Earth, however that is rare for mortals to hear. Kaminaga usually plays Super Mario, but there is a large variety of games on her list.

Kaminaga Zumeya named herself in the year 1324, exactly one year before coming into existence. Her job was to simply torture the residence of the underworld, but after hundreds of years of torturing, it got a little bit old. Kaminaga then decided to come to Earth. Little did she know, she was not able to return to the underworld after first entering the overworld. Because of this, she now spends her days playing video games and watching anime. Kaminaga also occasionally does dances to her favorite songs.