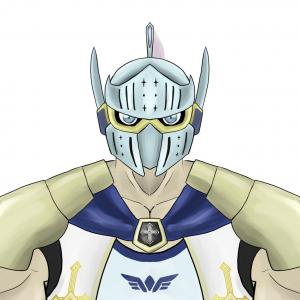 Zoran Reyes is a Paladin Vtuber who makes contents mainly in English and Chinese, and also speaks a little Japanese. With a passion for a variety of games (mostly RPG) and helmet characters (like knights and military people), he intends to spread their charm through Vtuber activity.

He loves drawing, design, games and bodybuilding, and as a Christian, he's also keen on biblical studies and would share his view of how a game's story relates to theology.

In a city names Zion in a futuristic (Cyberpunk) world, there is a paladin in shiny sky blue armour and silky white cloak, his name is Zoran Reyes.

He works at a small church in the city that is lead by an old priest, who adopted him when Zoran was a kid on the streets with no family and nowhere to go. The kind priest sheltered him, raised him and allowed him to study. Therefore, when Zoran grew up an adult and graduated from college, he was determined to do missionary works to bring the good news to the people in this dark and decadent city. Particularly, he dreamed of being a paladin like a true hero in those old-fashioned fictions.

His childhood playmate, who is a genius technician, has made him a set of armour so that he can wear them to do the good works. Although most time, he omits body armour since he claims it makes him feel too heavy and restricted wearing that, so that he often shows up in a strange look in consist of his cloak and training kit underneath, with the total reveals of his gains.

Recently, he has known there is a new technology that can make his appearance and voice spread across the dimension, then he decided to apply that to accomplish his missions for more people in other worlds. It is the beginning of his new journey as special existence names Vtuber.