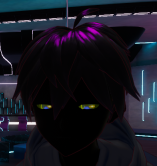 Ezekiel Tekashi (Zeke Zero) is a blackhole VTuber who premiered late May. He is of Jamaican and African-American decent but has a strong British(?) accent. Zeke has successfully kept his legal name and age separate from his online identity, however, it has somewhat been hinted that Tekashi is his last name. Zeke grew up in the United Kingdom after being born in Jamaica and living there for 2 years of his life, he then previously lived in London for another 2 years before moving elsewhere in the UK (which has not been stated publicly as Zeke wishes to maintain his anonymity). Zeke has described himself as a light-skinned / tanned male that is around average height (for his age) and has said that he has naturally white hair (due to a lack of melanin) which he dyes brown and black to avoid being noticed publicly, he also has heterochromia and showed a picture of his eyes on his twitter account which was deleted less than an hour later. Zeke, in real life, likes to stay out of the public's eye when outside as he stated he would like to, "live my real life without having to worry about people approaching me and disturbing my life in public, my nerves couldn't handle it."

Ezekiel suffers from multiple medical disorders but he has only openly admitted and explained a few of these to the public these are; Dissociative Identity Disorder / Multiple Personality Disorder (DID / MPD), Tinnitus, A Form Of Depression (unspecified), Acute Stress Disorder and has previously stated his VTuber debut was delayed by multiple months due to a large scale chest surgery in which he was bed bond for an additional 6 weeks. He uses some of these conditions to 'add to his personality' so to speak and claims he says this because sometimes he can't always control it. Despite all this Zeke still continues to create content and has recently adjusted into a full scale schedule in streaming and has plans to start creating YouTube and Tik Tok content, "even if it isn't the most consistent at first."

Zeke has also hinted and accidently revealed quite a few things across his twitter, twitch and discord. Some of which being ideas and plans for the future and some of this has just been rambling and questions. One thing Tekashi has revealed openly was his plans to make a independent VTuber agency that only benefits the members and doesn't restrain them like most other agencies that are currently popular. Zeke has also revealed a few plans for the future like his plans to create proper music instead of just covering songs and ideas to participate in large scale events. A crucial detail with all of this though is that Zeke has publicly stated he doesn't plan to reveal his face.

Zeke Zero is a Blackhole VTuber! Originating from a (now destroyed) Jamaican based research facility. Zeke was artificially created as a weapon that the foundation had lost control of due to "system tampering". Some time later Zeke has now become the embodiment of the void, taking blackhole like abilites and appearance. Zeke is a notorious mimic who enjoys copying people out of respect or to have fun and mess around.

Zeke doesn't actively know how old he is and suffers from split personality. Most of the time he mainly takes up the mental state of a 12-21 year old.

Zeke is said to have a large amount of issues, a lot of which occur with his family and authority figures. He prefers not to be questioned about them unless he brings it up himself.

Zeke has stated on many occasions that he can see things "differently" so to speak. It's believed he can see through fractures in dimensions and time.

Zeke doesn't understand a lot of things in life and in people, upon starting his streaming career Zeke didn't even know what a kink was, Zeke prefer to stay wholesome but is happy to learn new things to understand better.

Zeke hates compliments, is asexual and goes by he/they pronouns, sometimes referring to themselves as a "we" due to their split personality.

Music is a very effective way to communicate with Zeke who struggles to connect to people as he struggles to relate fully due to his emotional barrier.