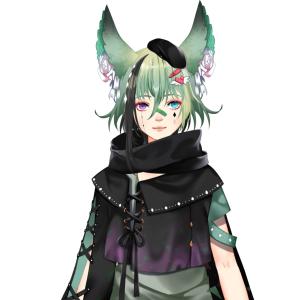 Yuneki is a transmasc, Virtual Streamer who streams in English and studies Japanese in hopes of becoming able to properly talk to international viewers and friends. They go by He/Him pronouns. He dreams of being an idol that makes others smile, despite the fact he enjoys un-idol-like things such as metal and rock music.

Yuneki is most known for his sleepy demeanor, with random bursts of energy. Adamantly refuting the claims that he is a rabbit contrary to popular belief, often proclaiming they are ' Just a stuffed animal! Not a rabbit! A stuffed animal!'. It is unknown by his viewers *Gachapyons what animal he is based off of.

Despite not considering himself a variety streamer his streams are usually guerilla and unplanned for the most part. Often seen drawing or surprising his community *Heibon Heaven with pop-up concerts where he sings various songs. He aims to create a safe space for all, doting upon his chat and often sulks whenever he is unable to stream due to his fragile health.

Having been the unsuspecting 'vessel' of a game of 'hide and seek alone' Yuneki is a stuffed animal that was brought to life by a child who had unsuccessfully attempted the ritual and lost the game. Failing the ritual resulted in Yuneki being summoned, allowing him to take on a human-like form. Having been brought to life Yuneki strives to become an idol to prevent others from following in his previous owner's footsteps.