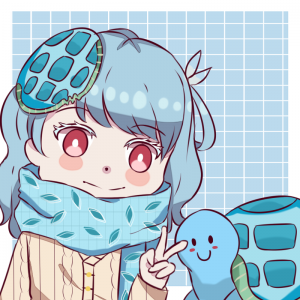 Yuki is a Virtual Snow Tortol who got transported to a different world. Lost, and confused as to what to do next, she decided to start streaming. She quickly learned the language of the humans and started to stream in English, but she can also speak in Filipino as well. She enjoys playing various video games, streaming, as well as making music.

The little snow tortol girl hails from a land coated with icy blue around the landscape, also known as the snowlands. One day she decided to get snow cones from the neighbouring snowy mountainside alongside her loyal friend, Tortolia. As she was attempting to head there, she got lost as her sense of direction was practically nonexistent. She found herself amidst ancient ruins filled with peculiar patterns. She briefly lost consciousness and after awakening, she somehow found herself stuck wandering the ancient ruins for what seemed like eternity. When she finally found the exit, alongside her friend Tortolia, she was suddenly transported into the ocean. She noticed she had a scarf on which had the same pattern as the walls on the ancient ruins. She managed to find herself drifting in the vast Pacific Ocean. Due to a stroke of luck, she found herself in a tropical island in the southeastern portion of Asia.