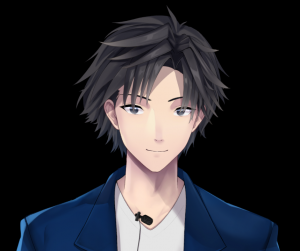 Yuji Ravindra is a Virtual Journalist who streams in Indonesian. Yuji debuted on April 20th, 2020. His channel hosts the Presenter Podcast which are mainly about the development of Virtual YouTubers, either domestic or foreign, indie or produced-by-corporate. Other than that, he usually makes gaming content. Yuji has a raven, named Dev. His character is actually not wearing pants, only boxers. He said he will wear it when his channel reached 1,000 Subscribers/he could afford it. His birthday is April 20.